“The narrative, deeply rooted in the psychological,  which light-footedly stages the dramas of the everyday in the sense of Shakespeare’s ‘All the world’s a stage’, is a consistent characteristic in the work of Heather Allen.”
Dr. Alexander Tolnay

A life inside, another world. An installation of 4 cardboard ‘rooms’ containing ca. 80 figures, which could only be seen through peep-holes.

Installations in 3 sites in Frankfurt/Main:

The ideal man – 75 versions made during a two-week residency at Artoll occupy a room, accompanied by more around the walls.

Two bronze figures climb up an 8-metre tower – where to from there?

A crowd of figures inhabit an entrance room to La Condition Publique, on scaffolding, packing cases, towers, ladders, shelves. Some of them are creeping in under the door.

Small figures, big room. But there are opportunities to climb.

Plasticine figures emerging from the cellar walls in the depths of  the Pince Galeria.

Installation, performance and 25min animated film about our travels back from Cripple Creek, Colorado with bags of gold carried by Dennis the donkey (sadly bombed to bits in Palestine). The gold didn’t make it back either. 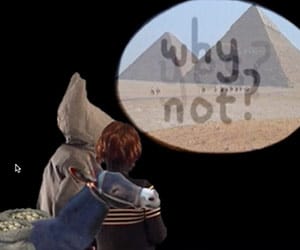 I made figures out of sugar paste and marzipan during a three-month stay in Salzburg, a city known for its sweet delicacies. Sugar played an important role in my life as I was highly allergic to it. Any small “sin” was immediately punished with physical reactions.
The exhibition represents an artistic questioning of “sweet” and “nice” in relation to the audience’s reactions to the figures. The figures became “collaborators” in the performance during the opening. I entered their world and began a destructive game… If the audience thought I was so sweet, they could eat me… 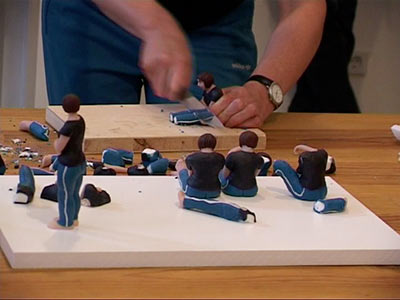